After a devstating hanglider crash it was thought I would never recover sufficiently enough to fly again. This was the day I proved everyone wrong and flew my saiplane. Since then I have also added a single-engine seaplane rating. Perhaps one day I will hanglide again..if not, there are always wingsuits. 😉 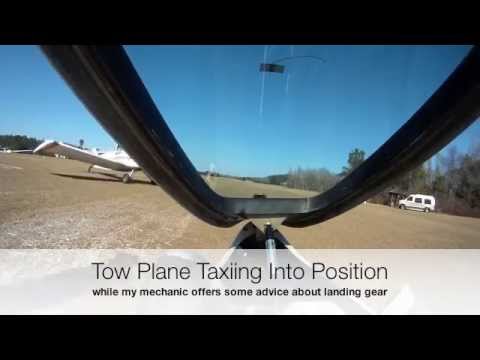 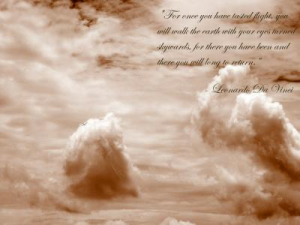 “For once you have tasted flight, you
will walk the earth with your eyes turned
skywards, for there you have been and
there you will long to return.”
– Leonardo da Vinci

Spotify playlist of favorite music embodying the spirit of flight.

The song “Let Me Fall” speaks to the price that one must pay for being skytouched. “Flight” is a musical adaptation of the famous poem High Flight, and speaks to the camaraderie of the sky. Learning to Fly is an unusual song by Pink Floyd about the joy of learning to fly from the days when I first flew. Sail often plays in my head when I fly.

“Oh! I have slipped the surly bonds of Earth

And danced the skies on laughter-silvered wings;

of sun-split clouds, — and done a hundred things

You have not dreamed of — wheeled and soared and swung

High in the sunlit silence. Hov’ring there,

I’ve chased the shouting wind along, and flung

My eager craft through footless halls of air….

Up, up the long, delirious, burning blue

Where never lark, or even eagle flew —

And, while with silent, lifting mind I’ve trod

The high untrespassed sanctity of space,

– Put out my hand, and touched the face of God.”

Another example that portrays the double-edged sword of the love of flight is the poem “High Flight” by aviator poet John Gillepsie. He wrote the now famous poem a few months before he died at the age of 19 following a midair collision between his Spitfire and a training aircraft. The collision occurred at a low altitude of 1400’, and the pilots were unable to exit their aircraft before impact. Both were killed.

Musician and pilot John Denver once set this poem to music, and I find it to be one of the most profoundly moving songs I have ever heard. Sadly, John Denver died while piloting an experimental aircraft after this song was released. 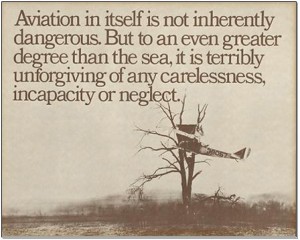 This serves as a very personal reminder for what the skytouched risk in pursuit of their passion, a feeling I understand all to well when the “perfect storm” of dozen different factors combined and resulted in a catastrophic crash of my hanglider.

This phrase and imagery is prevalent aviation clubs, FBOs, and small airports around the US. The plane picture is a replica of a 1917 bi-wing Curtis Jenny, an aircraft that embodied the spirit of early aviation pioneers. The accident is attributed to pilot error, and resulted in a fatality, and the near total destruction of the aircraft after only a few months of service and less than a dozen flights. I find this photo particularly moving because of the passion and joy in flight that the pilot owner had to build this aircraft. It is tragic that the joy was so short lived. The quote of the photo is attributed to Captain Alfred Gilmer Lamplugh of the British Aviation Group sometime in the early 1930s.

The Women Airforce Service Pilots of World War II were a courageous group of young women who broke down barriers and shattered stereotypes flying military missions in WWII. They were the first women pilots to fly for the military. Thirty-eight WASPs died in the course of duty.  They were not recognized as veterans until 2010, at which point surviving WASPS received the Congressional Gold Medal (a civilian award). They courage and conviction in the face of many risks with little reward (other than the chance to fly) are forever an inspiration to me.